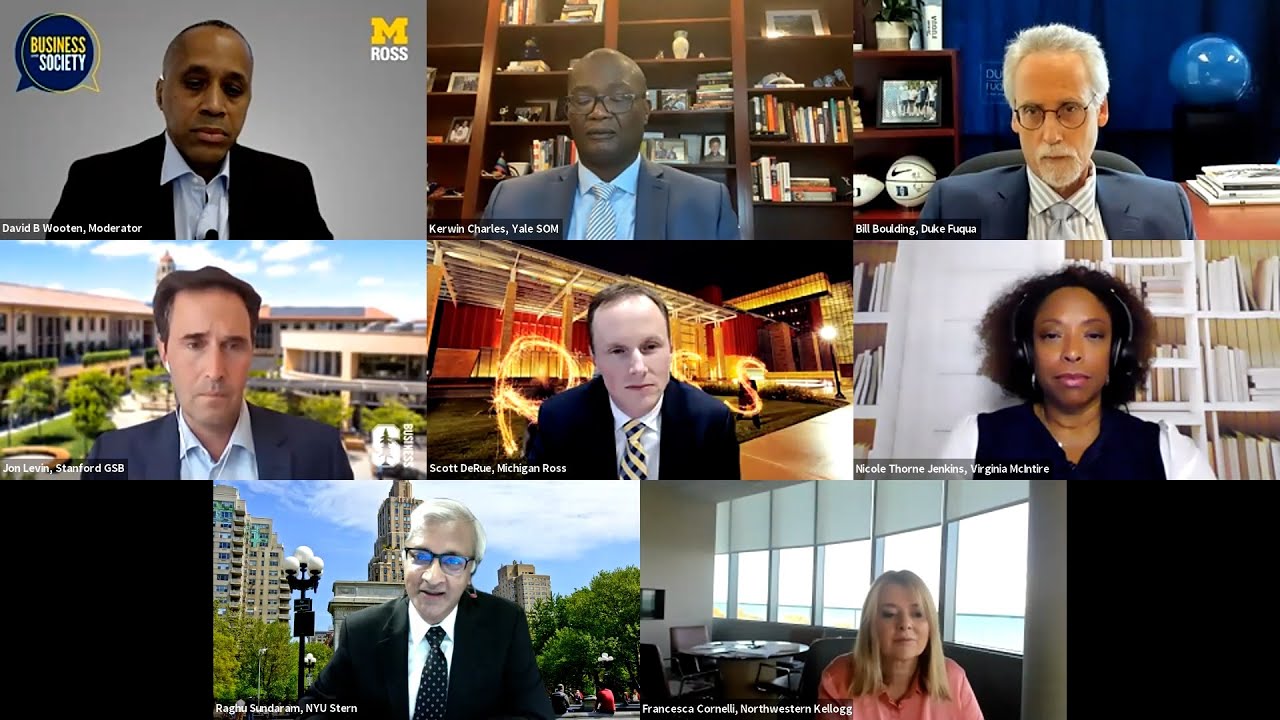 Business schools have an opportunity and responsibility to lead in advancing racial equity in business and beyond. That was one of the main takeaways from the Race and Business Education Panel recently hosted by the Ross School of Business. Seven deans from leading business schools participated in the virtual event.

The panel was the first event in the Michigan Ross Business and Society series, which was launched in 2019 to encourage constructive conversations about the role of business in society, and to explore important economic and social challenges facing the world today. This year’s series is dedicated to issues regarding race and business.

Moderated by David Wooten, University Diversity and Social Transformation Professor and associate dean of One-Year Master’s Programs at Michigan Ross, the deans’ panel was organized to discuss the challenges and opportunities they face in their efforts to prepare graduates to be inclusive leaders of a racially diverse workforce.

“I am proud that Michigan Ross initiated this important conversation,” Wooten said during his introduction of the Race and Business Education Panel. “And I am thrilled to kick off the series with an amazing panel of seven deans at leading business schools from around the country.”

Wooten took turns asking the deans for their thoughts on questions related to three main topics: Where are we, how are we doing, and what or how can we do better?

One question that was discussed was whether business schools were doing better in dealing with race than the business industry, which sparked mixed opinions from the deans.

DeRue said he thought in terms of embracing racial justice, diversity, and inclusion broadly that business schools were leading.

“In terms of leadership, when I look across business schools, thanks to our students, their empowered voices, their strong desire to be part of the solution to racial injustice, and a broader set of diversity and inclusion-related issues, I think business schools relative to industry are proactively leaning in to these conversations and the really hard work that's necessary to create awareness, mobilize people to address racism in education, and address racism in business,” he explained.

However, DeRue agreed with several other deans that business schools are lagging behind industry when it comes to underrepresented students’ lived experiences at business schools and also at increasing diversity within the faculty and student body. He pointed out that there are many cultural and structural challenges that persist:

“Business schools, whether it's because of the constraints of our own creativity or more structural reasons, such as rankings that don't value diversity, or if you're a public institution, state-level policies that restrict diversity in a variety of ways, we as a business school industry have not been as creative about seeking out new and different channels for attracting talent,” he said. “On that dimension, I think we can and must do better.”

DeRue mentioned several efforts created to increase diversity at Ross, including the new Blau Initiative for Diversity and Inclusion and the Och Initiative for Women, a program that has doubled the number of women going into finance at Ross over the last five years.

The event ended with each dean giving their final thoughts on the issue of race in business education.

Boulding: “What we need is the decency to actually care about one another, to bring the best out of one another and give people the opportunities that they deserve. And so in my opinion, decency compels us to act, to dismantle systemic racism, and to act now.”

Charles: “We remind people, finally, that we have a moral obligation to attend this issue. Our institutions played a role in generating some of the racial inequities we observe today by historically not admitting certain people from particular ethnic groups or not engaging with this issue in 1968 or '75 or '88, that maybe we could have. We have come belatedly, I would argue, to an aggressive engagement with this problem, and because of our late start, we have more to do.”

Thorne: “We have told students, ‘If you work hard, you go to college, you'll have a great career, and it all depends on you.’ Without really pulling back and saying to students, ‘The reality is, there are so many other things around you that determine your success, the family of origin that you have, the passport that you hold, and the race that you are, and those systemic things are really important.’ And I think the opportunity that we have in business schools is to tell all of our students that, ‘Yes, you are hard working, you are smart, but your success is not solely due to your hard work and your effort, there are systems and structures in place that contribute to and detract from one's success.’"

Levin: “This has been in many ways an incredibly difficult year, just maybe unprecedented difficulty in all of our lifetimes, but it has had some silver linings. One of them is that it's forced all of us to go through a process of incredible innovation in just about everything we do, and this event is an example of that. And another is that it has just focused all of our attention on the issues we've been discussing today in an incredibly productive way and in a way that has a lot of potential to help the whole country.”

Sundaram: “This is a time for action. It is a time for us to move together on what we're doing, but it is also a time to make sure that we don't lose the dreams of a better future and we have a precise idea in mind of what it is that we're moving towards.”

After thanking his fellow deans for participating in the panel, DeRue emphasized the importance of viewing their collective commitment to diversity, equity, and inclusion as a movement, not just a moment.

“This moment is our call to really ensure that we’re part of the sustained movement that creates real and lasting change. And if we do that, our society globally and locally will be better for it,” he said. 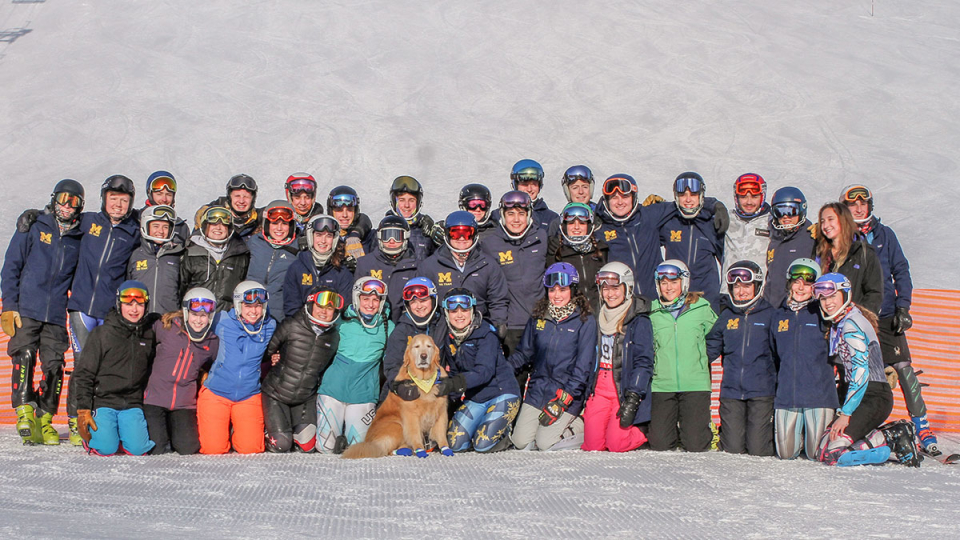 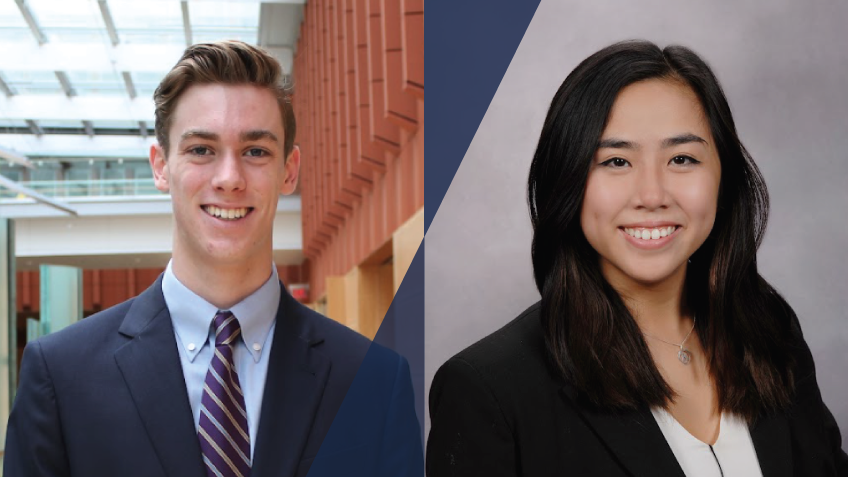 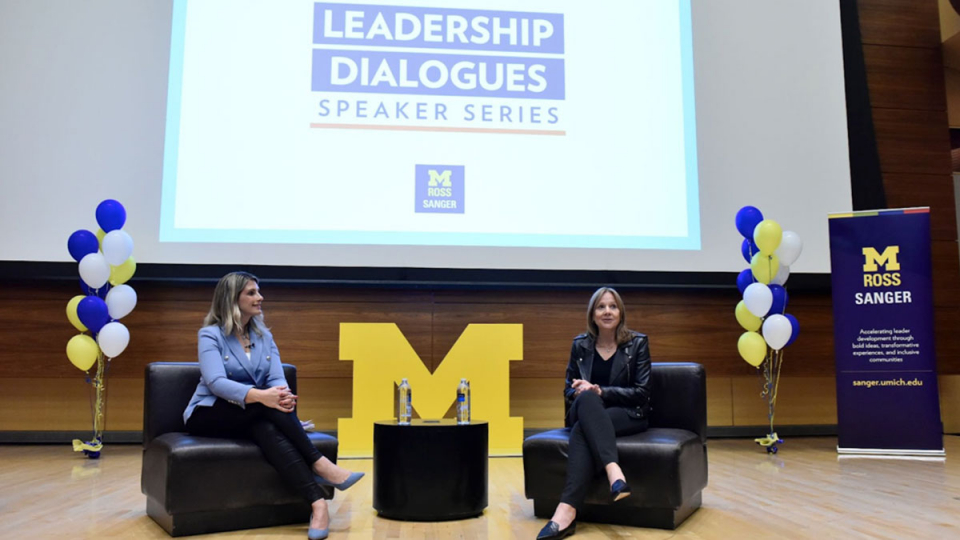