Why did I choose Ross? One word: Happiness

Coming back to school was a very difficult decision for me. After working for six years as a consultant, the idea of making professional and personal sacrifices to become a student again wasn’t very appealing. After deep reflection, I quickly realized that earning an MBA would not only advance my career but also equip me with the knowledge, network, and skills to pursue my dream.

But the question was: Which MBA program was the best for me?

Like a typical consultant, I put together an elaborate spreadsheet to compare schools, full of rankings, career placements, and courses offered. However, when the time came for me to make my decision the only factor that truly mattered was happiness — and there was no question that Ross was the place for me.

Happiness means different things to everyone. Take the stories of three of my classmates as examples (I asked them if I could write about them here; they graciously agreed).

Aniefre is a Ross alum (MBA ʼ13) originally from California. Aniefre’s idea of happiness was becoming an entrepreneur. During his New Venture Creation class, he worked with a fellow Rosser on how to empower independent music artists. He utilized the support of professor Jim Price to shape and launch a business that would achieve that goal. He is now co-founder of Vaytus, an online independent music service due to launch next year. Aniefre reached his level of happiness.

Lauren is a second-year MBA student. Lauren’s idea of happiness was transitioning from a non-traditional career to consulting. She was an educator through the Teach for America program for several years in the Washington, D.C. area. She was able to craft her story, hone her casing skills, and network with top consulting firms with the help of fellow Rossers and alumni. Lauren interned at PwC and will be returning there next year. Lauren reached her level of happiness.

CC is a Global MBA student. CC’s idea of happiness is expanding his family business. The brand of the Ross MBA spans the globe and attracted him to come to Ann Arbor from Taiwan. I met CC during my short-term study abroad in Beijing and immediately became fascinated with his dedication. He was determined to take the brand and skills from Ross and bring them back home to improve the family business. CC has taken several classes with our respected faculty members and gained the strategy, marketing, and entrepreneurship skills to make sure his family’s business continues to thrive. CC reached his level of happiness.

So then, what is my personal definition of happiness? Creating genuine relationships with people from around the world that I otherwise would have never met, in an environment that fosters a true collaborative community. I’m serious. And Ross has been an amazing place to help me achieve my level of happiness.

Tony Rice II is a second-year graduate student set to graduate in May 2015. He is also the president of the Ross Student Government Association. 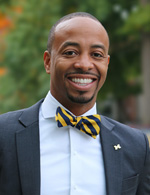