Benjamin Lindau, BBA ‘21: Blazing His Own Path to Business and Athletic Success 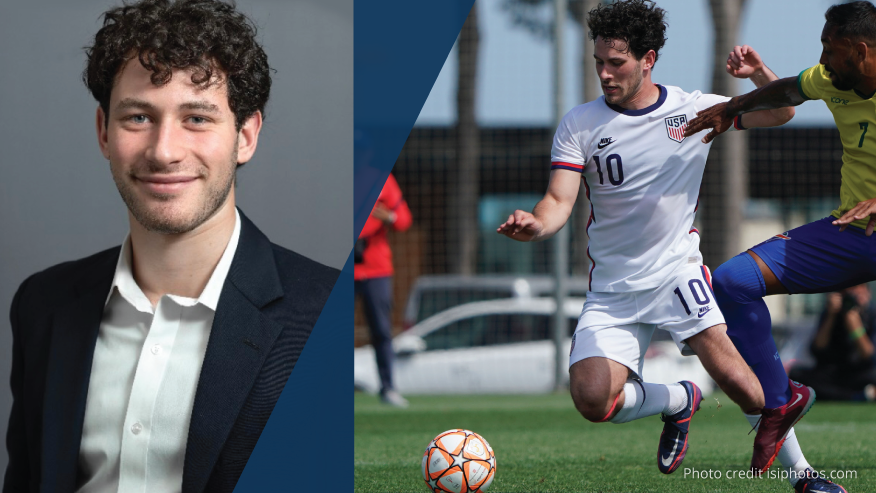 Benjamin Lindau, BBA ‘21, balances two high-level career pursuits: He’s an analyst at the Related Companies office in Chicago and a member of the United States Para Men’s National Soccer Team. As part of Team USA, he’s represented his country all over the world, and even won a bronze medal at the 2019 ParaPan Am Games in Lima, Peru, while a student at the Ross School of Business.

Currently, Lindau works more than 10 hour days at Related Companies and then trains for multiple hours in the evening. Then there’s his commitments to Team USA and Edgewater Castle FC, a semi-professional soccer club from the northside of Chicago.

Combined, his professional and soccer careers are an all-consuming undertaking, but Lindau can’t imagine a life without his dual ambitions.

“I would really struggle to perform as an athlete if I didn't feel like I could chase my professional dreams,” Lindau said. “I feel like the luckiest person in the world. To be a top-level athlete and professional are the two career paths I really wanted in my life.”

‘A blessing in disguise’

A sports-lover since childhood, Lindau had dreams of playing soccer and starting his own business. But at 11 years old, he suffered a stroke that paralized the left side of his body.

“It was a blessing in disguise that I had gotten interested in soccer right before the stroke,” Lindau said. “It gave me a huge motivation to follow through with the physical therapy and rehab so that I could get back to playing.”

Lindau relearned how to perform all of his usual day-to-day tasks, and after more than a year of hard work, he got back to playing soccer again.

His opportunity to play professional soccer came in high school after reading a social media post about the U.S. Men’s Soccer team involving the 2016 Summer Paralympics in Rio de Janeiro. Lindau reached out to the coach and was invited to join Team USA shortly after the games were complete. Around that same time, he started applying to business school and was accepted into the BBA program at Michigan Ross, becoming a third-generation Michigan legacy.

A highlight of Lindau’s development at Michigan Ross came from the group work assigned by many of his professors. At times, he served as the financial lead on a project. In other instances, his role was to develop and use his soft skills or to think outside of the box to come up with creative solutions. It taught him to be flexible and to master a variety of business-related tasks, both of which are invaluable in a professional setting.

“One thing I learned about myself is that I'm really comfortable being able to step back and allow myself to fall into whatever role needs to be occupied,” said Lindau.

The lessons in adaptability that Lindau took from Michigan Ross make him an ideal fit as an analyst at Related Companies, where each work day looks different than the last.

As an analyst, Lindau develops financial models and manages projects to evaluate potential acquisitions and in-progress Chicago developments. At times, he’s out in the field touring prospective properties and meeting with investors. Other days, he’s adjusting and adding figures in Excel spreadsheets.

Ross mentorship and an interest in real estate

Lindau developed invaluable connections at Michigan Ross that continue to benefit him today.  He was greatly influenced by Peter Allen, a former adjunct lecturer of real estate, who recently retired from the university.

“He was head of the Michigan Real Estate Club,” Lindau said. “I took his class and it really lit the fire for real estate within me.”

Allen helped Lindau land his position at Related Companies and the two are still working on a few projects together regarding the Equitable Ann Arbor Land Trust, a nonprofit Allen recently launched to develop affordable housing in the city. The pair frequently discuss Allen’s goals for the trust, and along with others at Related Companies, Lindau advises Allen on how to best accomplish those goals.

Set up for success in business and academia

Also during his time at Michigan Ross, Lindau honed the ability to manage a rigorous workload with the demands of competing in international soccer competitions. He trained full-time while studying at Ross, and fortunately many of his professors offered the flexibility he needed to maintain his commitment to Team USA while pursuing his degree.

“A number of Ross professors definitely supported my athletic endeavors, and I'm really appreciative of that,” Lindau said. “It meant a lot to me that there were people who were willing to back me up on that.”

Lindau is thankful that, like his professors, Related Companies is supportive of his soccer career. In May, he competed with the U.S. Para Men’s Team in the International Federation of CP Football World Cup in Barcelona, and next year he plans to travel to Santiago, Chile, for the 2023 ParaPan Am Game — only this time he’s hoping for gold.

Meanwhile, Lindau hasn’t given up his dream of becoming an entrepreneur and starting his own business, but he also sees the potential for growth and a long career at Related Companies.

Whatever he pursues, he is confident he’ll be prepared for the challenges that lie ahead.