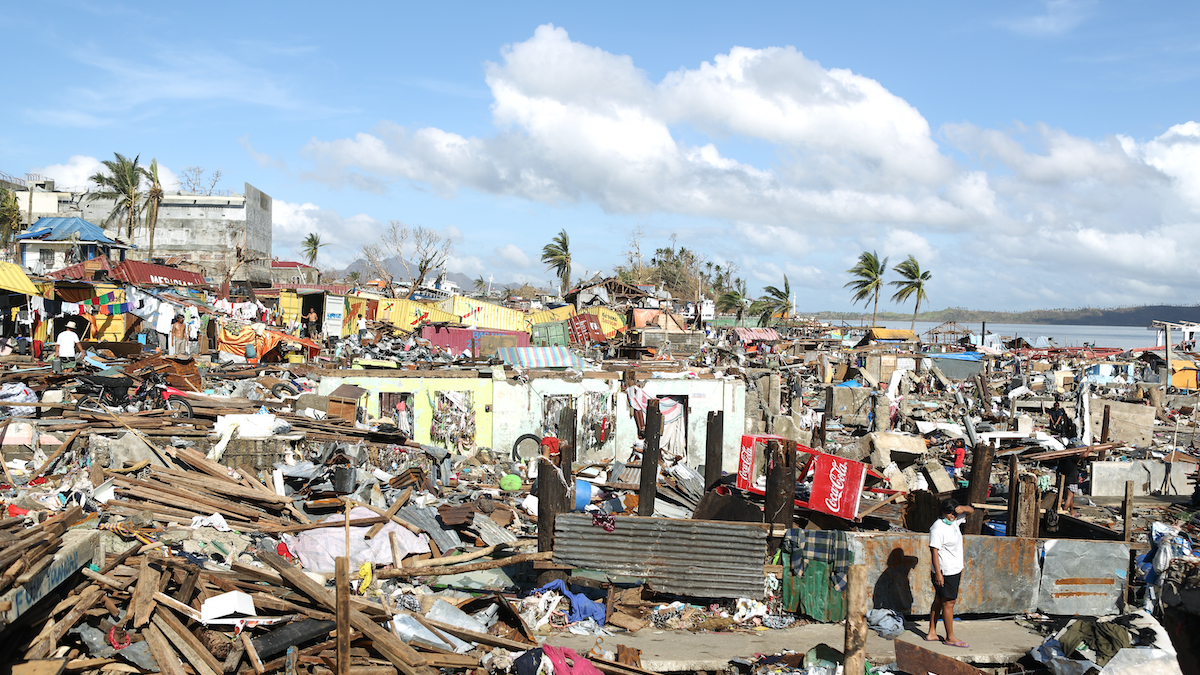 Distributing relief supplies to typhoon victims requires storing the goods in the best location before the typhoon hits. The tricky part is knowing where that is — but Ross School of Business Professor Joline Uichanco has developed a method to figure it out.

As detailed in a paper recently published in Manufacturing and Service Operations Management, Uichanco created a data-driven model for demand prediction and relief distribution. It allows a government or relief agency to input information ahead of a storm and receive recommendations on the most effective way to position relief supplies before the storm hits.

Although Uichanco’s work focuses specifically on the Philippines, which is particularly susceptible to typhoons, a similar approach could be used to develop tools to prepare for typhoons and hurricanes around the world, she said.

Uichanco recently answered a few questions about her work.

What prompted you to address the problem of typhoon relief?

Uichanco: In 2013, there was a huge typhoon, Typhoon Haiyan. I was on Facebook, and a lot of my friends and family in the Philippines were saying, "Hey, this typhoon is historic; it's expected to be the strongest typhoon ever in recorded history to make landfall.” And indeed it was. In the aftermath, I watched the international news and saw all of these people in the hard-hit areas who were hungry and thirsty. But the government and humanitarian organizations had trouble just delivering food and water.

Since at that time I had just earned my PhD specializing in supply chains, I thought maybe I could do something to make things better in the Philippines, maybe not for this typhoon, but for the future. I grew up in the Philippines, and every year we would have typhoons that affected a lot of people.

One of the critical points you make is that the relief supplies need to be in place before the typhoon hits, rather than trying to do a wide distribution afterward. Is that something that's widely recognized?

Uichanco: The Philippines is an archipelago, with about 7,600 islands. After a typhoon hits, it's very difficult to do anything reactive and move resources to where they are actually needed. After a typhoon, there is a lot of chaos. Ports could be damaged and congested from all the response activities going on. This is why, especially for the Philippines, pre-positioning relief items before a typhoon is very important. This idea is well recognized by the lead agency in disaster management in the Philippines.

The challenge with pre-positioning is that you need really good models to predict the demand for relief items. Otherwise, you’ll pre-position in the wrong islands and you’ll be in a worse position than if you didn’t pre-position at all. Poor demand forecasting is the reason why pre-positioning is not done. It’s not as easy as, say, Amazon predicting demand for a product where you have a lot of data to work with. With humanitarian supply chains, it's difficult to predict demand for something that is infrequent and has wide-ranging effects.

So even though it is known that pre-positioning relief supplies is important, they don't do it. They don't have the necessary predictive models to assist them with pre-positioning supplies.

How did you approach this problem?

Uichanco: First, I studied the public data from Typhoon Haiyan. I saw that the government was able to distribute food, but the distribution was very limited in the first seven days after Haiyan made landfall. From news reports, I learned how difficult it is to distribute food after the fact, and that pre-propositioning supplies is key.

Then I developed a model to optimize the distribution of supplies. I realized that the optimization model is actually the simple part; the more difficult part is a model to predict demand. To predict the demand for relief items in a town, I wanted to use information about the town’s risk vulnerability, such as the population index, and its risk exposure, such as its nearness to the typhoon path.

Since the Philippines has had many typhoons in the past, I wanted to use historical data to train this model. I used the Philippine census data and housing data for the risk vulnerability data. As for risk exposure, I used the data on typhoon tracks and wind speeds of past typhoons. To train the model, I needed to gather data on the actual demand for relief items during past typhoons. I found that the Philippines actually keeps very detailed daily records about the needs and response activities in all past typhoons. This gave me a lot of data that I was able to use to develop a model for predicting demand.

From the demand prediction model and the optimization model, I created a comprehensive data-driven planning tool for relief pre-positioning.

And this is fully functional and available for the government or relief agencies to use now?

Uichanco: Yes. I published a paper that provides the details for the models, so this knowledge is now publicly available. Developing a decision support tool is straightforward once you have the prediction model and optimization models.

Your paper notes that this approach could be applied to other countries besides the Philippines. How would that work?

Uichanco: One thing that I've learned from this project is that the setting of the specific country is very important. Because the Philippines is an archipelago, improving the accuracy of a prediction model can really make a big difference. In the context of the U.S., for example, conditions are very different. Not only do you have less frequent storms, but you have a lot more options in terms of transportation.

But the idea of using data for creating predictions of demand for relief items is something that could apply anywhere, and that's something that is lacking in a lot of the humanitarian logistics research.