Neri Oxman: Shake Off Your Labels And You'll Unlock The True Power of Creative Thinking 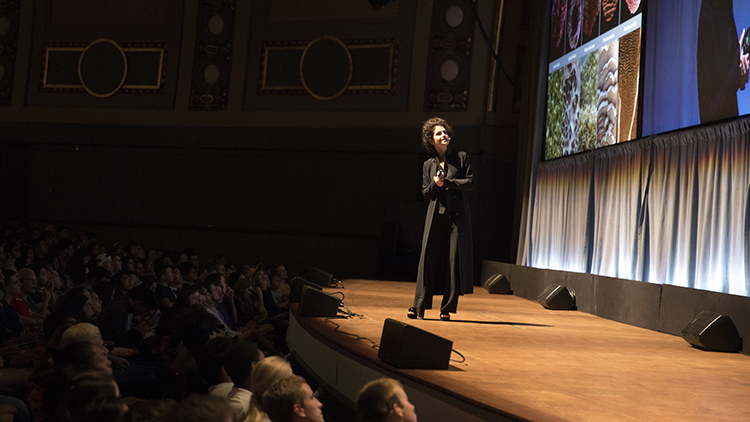 A swarm of robots that create their own materials and design while they construct a building. A “wearable” designed for interplanetary travel. A pavilion built by 6,500 silkworms.

These items sound like props from a futuristic science fiction movie, but they’re real products that exist in 2018. And they’re just the tip of the iceberg that is Neri Oxman’s creative prowess.

Oxman is hard to summarize briefly, but we’ll try: She is an MIT professor and world-renowned architect, designer, and scientist. She has created otherworldly products for the Dalai Lama, David Bowie, and the United States military. Her projects have graced the catwalk of Paris Fashion Week and have birthed ecosystems to help save bees from extinction.

She’s been called one of the most brilliant and prolific minds of our time––authoring more than 100 scientific papers and patents––and she was the featured speaker of the 2018 Joseph and Sally Handleman Lecture at the University of Michigan.

In a talk that focused on her unique creative process, known as the Krebs Creativity Model, Oxman addressed more than 2,000 students from Michigan Ross, the Taubman College of Architecture and Urban Planning, the College of Engineering, the Stamps School of Art and Design, and local community members at Hill Auditorium.

Creating such seemingly impossible products requires blending several disciplines, which usually reside in silos of their own. Oxman pioneered and named the field of Material Ecology, in which products and buildings are biologically informed and digitally engineered by, with, and for nature. At MIT, she founded and directs The Mediated Matter Group, which invents products and structures that combine computational design, digital fabrication, materials science and synthetic biology.

If this leaves you scratching your head, you’re not alone. To watch Oxman speak about the process behind her products is both fascinating and a little overwhelming. After all: who would have imagined a wearable harness, created from a 3D printer, that is both alive and able to produce its own sugar for energy, similar to the way a plant does? The product combines computer science, additive manufacturing, and synthetic biology.

While Oxman’s imagination seems to exist on another plane (or era) from the rest of us, her moral foundation is grounded in reality: she wants to go beyond boundaries to help people and the planet in ways never previously considered. “Why OR when you can AND?” she asked the audience. “Why art OR science? Why art OR engineering, if you can have both?”

“Whatever it is that you’re designing––a product, a building––these are just labels,” Oxman said. “If you think about the process, you’ll see it’s there to enable a whole family of products.”

Oxman’s work is featured in permanent collections in the Museum of Modern Art, the Smithsonian, and other cultural institutions across the world. She and her team have won numerous awards and have been invited to the World Economic Forum and the White House.

Oxman is the most recent guest featured in the Joseph and Sally Handleman Lecture Series. Previous speakers include bestselling author Malcolm Gladwell, Facebook Co-Founder Chris Hughes, and Ethos Water Founder Peter Thum. The series, focused on cutting-edge issues that keep students in the forefront of emerging business challenges and opportunities, was established by the Joseph and Sally Handleman Charitable Foundation in 2008.