I Just Landed My Dream Job, But Recruiting For It Was a Wild Roller Coaster 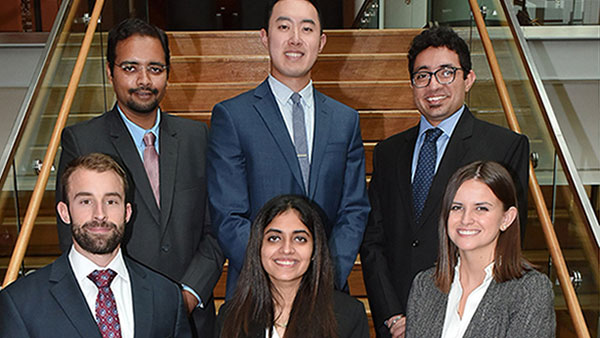 Three months ago I landed a job at my dream company, Anheuser-Busch InBev.

Being a Master of Supply Chain Management student straight out of undergrad, I would have never imagined I’d be offered a leadership role responsible for one of the world’s largest beer productions at such an early age. But, this job did not come easy. And as the title of this blog post suggests, my journey to landing an offer was not a smooth ride.

It was an experience filled with moments of euphoria, moments of defeat, and moments of serious life reflection. But, as I stand ready to start full-time brewing beer in Los Angeles this summer, you can trust me when I say: it’s worth it.

Luckily for you, I have experienced many of the ways the job recruiting process can go wrong and am here to equip you with the skills and tips you’ll need to fend off these frustrations.

Let’s look at preparation first. The great thing about the Master of Supply Chain Management (MSCM) program is that it prepares you early. Two months before recruitment even begins, to be exact.

Before I set foot on campus I was already taking Career Aptitude Tests and making sure my resume was worthy (thank you, Vmock). Upon arriving on campus, I met with the Career Development Office (CDO) to go over the results of the aptitude test and develop initial job search strategies I could start to work on. Everything sounds pretty pleasant so far, right?

Well as mentioned earlier, things can get pretty hectic pretty quick, and for many students, that transition is in September. With classes starting, I became overwhelmed by the sudden transition and began to focus all my efforts on homework and projects, putting my recruitment progress to a halt. To revive my job search preparation, I found it helpful to schedule meetings with the CDO peer coaches and to generate personal goals/deadlines to keep myself accountable.

Now let’s move into opportunity. Being one of the top B-schools in the nation, Ross gets a lot of attention from a lot of companies; therefore, it’s important to keep track of what companies you’re interested in, when they’re coming, and who they’re recruiting. The Ross recruiting dashboard and industry-specific Ross student clubs are fantastic for keeping track of this information and give you the best chance of making a meaningful, successful connection.

For those also interested in non-business related positions or would like more networking opportunities, both Handshake and the University of Michigan Career Center are great resources for additional information.

Tip #2: Assume Nothing, Question Everything

Simple assumptions can be catastrophic in recruiting. For example, when I received my first case interview with Anheuser-Busch, I assumed it would be similar to a consulting case where I wouldn’t need a calculator. However, upon re-reading the notification email right before my scheduled interview time, I realized my assumption was wrong (thankfully I was able to Bird to a nearby CVS). You probably won’t run into the same situation, but you get my point: don’t assume anything.

With the stress that recruitment brings, it’s easy for little setbacks to provoke a flurry of assumptions. One common frustration I’ve experienced is when companies fail to communicate next interview steps or even final offer decisions on-time. It’s easy to start assuming you did something wrong, but I’d recommend sending a follow-up email to the recruiter to check on your status.

Another common situation I experienced was having a poor interaction with a recruiter, which generates a negative perception of the company. Instead of shutting doors based off one interaction, I’d recommend networking with other recruiters or conducting research online to gain a clearer picture.

This list isn’t exhaustive but, hopefully, it shows how common simple assumptions occur and how misleading they can be.

“Rejection is, quite simply, the worst part about recruiting.”

After my second round interview with Anheuser-Busch, I was feeling great about getting invited back for an on-campus, group simulation interview. However, about four hours later, I received an email informing me I had not been selected to move forward. At moments like these, it’s completely normal to feel discouraged, but it is crucial that you swiftly get back on your feet and focus on the next steps.

The key step I took after my rejection was sending a follow-up to my interviewer thanking him for his time and asking for constructive feedback. While it might be hard to swallow, feedback can provide opportunities for needed improvement and erase any assumptions about the reasons for being rejected.

Positive follow-up emails can also help with referrals, which is exactly what happened to me. After sending my follow-up, my interviewer referred me to a different full-time program within the company where I was eventually hired (the ride’s finally over!).

If you’re going through the recruiting process now or wondering what it will be like when you reach this stage, hopefully, this helped get rid of some of your fear for the process. As I mentioned earlier, recruiting isn’t easy but it is definitely worth it. At Ross, you are surrounded by fantastic resources and incredible opportunities, but it is up to you, ultimately, to translate it all into an offer.

Best of luck with recruiting, and Go Blue!!

More about the Ross MSCM

Where did you do your undergrad?

Tell us about your hobbies.

I love traveling! Before the Fall semester started I traveled to Australia and for the just completed Winter break I traveled to Shanghai, Korea, and Japan.

I am the proud caretaker/father to @cheddarthecorg who makes occasional visits to Ross!

More about the Ross MSCM Program