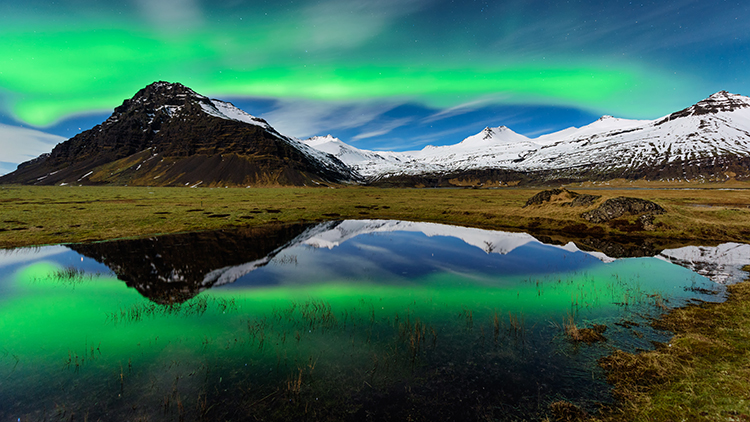 I was expecting Iceland to be beautiful, but nothing could have prepared me for what it was really like to see the country and its people up close.

When you get of the plane in Reykjavik, you step foot onto the surface of another planet––even though it’s just five hours from Boston.

I spent a week in Iceland during Spring Break with a Global Practicum class through Michigan Ross, and there were literally moments that took my breath away. The capital, Reykjavik, at first looks like a small city, almost like Ann Arbor, but it’s in front of these enormous, towering mountains.

We saw the Northern Lights take over the sky four out of the five nights we were there. We also toured these incredible waterfalls and geysers. I kept thinking if the show Game of Thrones were real, it would take place in Iceland.

And just like the environment was unexpected and awesome, so were the businesses we toured and explored during our trip. Iceland experienced a financial collapse in 2008, and the country decided to let the banks collapse instead of saving them the way the US did.

They have since made a recovery, but the crisis is definitely not forgotten. Icelanders have a strong sense of awareness of the economy and how what they’re doing contributes to the welfare and betterment of the country. There’s not really the status attached to certain to jobs––they’re all proud of their roles and they view it as contributing, whether they work in a fishery or in upper management for a large national company.

We met with a company named Meniga, which provides online banking and personal finance tracking services like the company Mint here in the US. You wouldn’t really expect a bank to talk about how what they’re doing is for helping the people of Iceland, but they did.

My class was also surprised to learn how cooperative some of the businesses are. My favorite visit was with Ossur, a prosthetic company. The man who founded it had been a shoemaker, and he decided to go into prosthetics to help people.

They were pretty transparent in everything that they’re doing. One of my classmates asked what the competition was like in the prosthetic industry. And we were so surprised to hear his answer: The company has had projects where they came up with something first, a new technology, but they knew the another company was better capable of developing it, so they collaborated to bring it to life.

I think everyone was just skeptical of their mission–– is it really to help people? And the employees said yeah, absolutely. If another company can do something better, we’ll work with them to do that. We were all kind of taken aback and inspired. We left thinking how cool it would be to work there.

Seeing the deep pride that Icelanders take in their work, and the openness to collaborating with others, made me think of my positive leadership class, which all Master of Management students take. Part of that course was learning about how to “dig deeper,” how to find meaning in your work and how important it is for both your productivity and your happiness. It seemed to me like Icelanders were living examples of how well that works.

What I took from the trip is that you really can do whatever makes you happy. And that’s what you should do. You don’t need to be making the most money, as cliche as that may sound.

I also learned that Iceland really isn’t prepared for the tourism industry, which has picked up in the past year or so. Shops still close early, and there aren’t tons of tourist stands or guides.

So fellow business students, take note! If you want to set up a tourism business in Iceland, you’ll be in good company, with great people who love what they do, and with amazing, beautiful scenery.

Lindsay Welhoelter graduated with degree in biopsychology and neuroscience from the University of Michigan. She plans to use her MM degree for a career in healthcare.

Learn more about the Master of Management Program at Michigan Ross